Some people think that recycling is a new idea, but in fact it has been around for years. Before the days of cheap mass produced products, things were made by the hand of the skilled craftsperson. Items were crafted with care, and time and creativity were given to each piece. It was built to do the job well and it was built to last.

Back then, things were built and sold to serve a purpose and if in the unfortunate event something did break, we did not throw it away, we fixed it. If we could not mend it, we recycled it into something else just as useful.

To see one of the finest examples of recycling, we must visit the village Tirley in Gloucestershire, and the work of Hubert john Carter.

Carter was a master wheelwright by trade, who with his business partner George Creese, ran Tirley Wheelwrights. Interestingly enough by itself, when it closed the shed and contents were dismantled and taken to Gloucester Folk Museum, where it can be seen today.

Carter was a skilled carpenter, village blacksmith, handyman, sign-writer and musician; he had made a violin using only very basic hand tools and was also known to have a keen interest in clocks. When the opportunity came to built a clock for the church of St. Michael and All Angels, Carter said he would ‘give it a go’.

He immediately set to work on his hundred year old lathe that he inherited from his great-uncle, and plainly a keen recycler long before the term was coined, Carter used whatever was available, along with his ingenious creativity.

Gate latches became the hands, and the face was built from the end of a cider barrel. The clock mechanism was built from, among other things, a pistol barrel, a spade, the remains of a beam drill, components from a penny farthing bicycle, bits from a lawnmower, a chaff-cutter, a roasting jack, a bean drill, a separator, a winnowing machine, a bicycle pedal, the brake rods of a cycle, a scythe, a cannon ball, a pistol barrel and old farmyard weights. 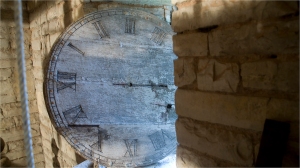 The pendulum was a skittle ball. The frame had once been the gateposts and fence from in front the Haw Bridge Inn near the River Severn. Apparently Carter had erected this fence on a previous occasion to stop drunken patrons falling in the river.

The spring was taken from a wind-up gramophone, and the clock had a set of chimes.
Apparently somewhere within the clock, performing an extremely important timekeeping duty was the door knocker from the village pub.

The fascinating timepiece made by John Carter just after the First World War was dedicated to the memory of Lieutenant George Fowler, a local farmer’s son who was killed in conflict.

Carter looked after the clock in his own ‘special’ way; he wound it up everyday and if it broke, he simply fixed it. This he continued to do right up until his death at the age of 81 in 1945. The clock continued to work up until the late 80’s, but without the magic hand of Carter, fell into disuse. 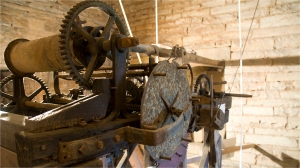 Fortunately a horologist from Birmingham came to visit Tirley and managed to coax the mechanism back to life for a time. However without regular attention the clock proved temperamental, and so in our modern times of efficiency and reliability fell victim to the ravages of Health and Safety. Apparently people were worried that the skittle ball pendulum would fly off and bowl out the bell ringers and half the congregation.

A very modern, up to date, newly fangled all singing, all dancing electric clock mechanism was installed to turn the hands. The new mechanism promised to save the church an absolute fortune in labour, running and maintenance costs; heralding in a new era of enlightenment to the realms of modern time keeping.

Within the space of a couple of years, the new modern electric mechanism did as expected, and promptly obliged the world with a demonstration of ‘in built obsolescence’…. 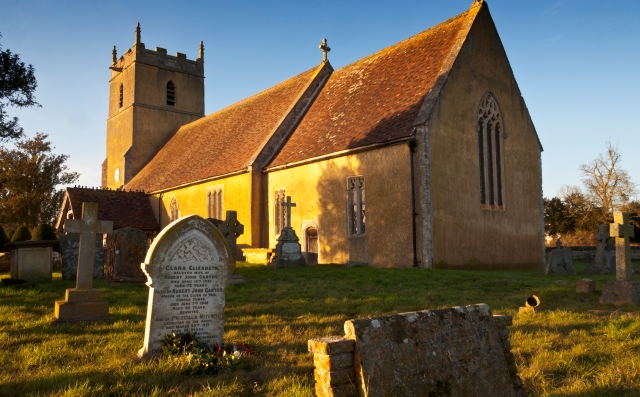 John Carter’s grave lies just in front of the church, just below his clock, I wonder what he would think of this?

Historian – Photographer – Filmmaker Retired construction professional with a passion for public, social and industrial history. I believe in equality, dignity and integrity for all. Don’t like people who try to belittle the ambitions of others. I am of the opinion that my now life belongs to the whole community and as long as I live, it is my privilege to do for it whatever I can. I want to be thoroughly used up when I die, for the harder I work the more I live.
View all posts by morturn →
This entry was posted in landscape, local history, objects, oral history, photographs, Uncategorized and tagged heritage, history, Objects, Public History, Truth & Rumors. Bookmark the permalink.